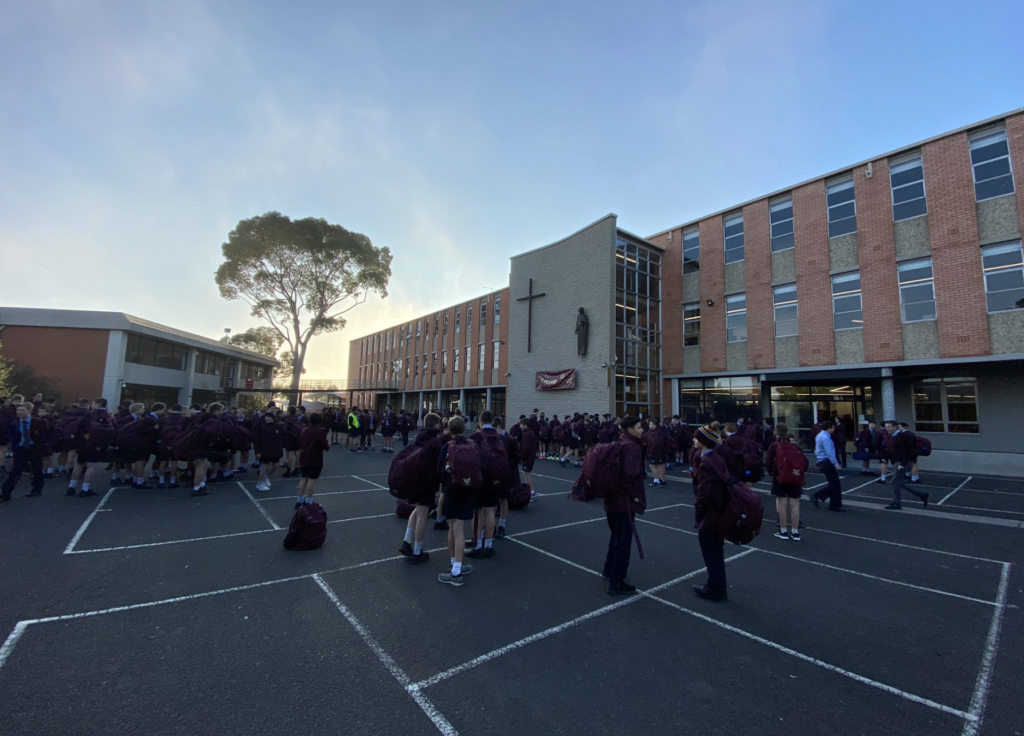 Director of Professional Learning and Partnerships at Marcellin College.

When I need a bit of inspiration to keep going as a teacher and leader, I think of Terminator 2: Judgement Day’s antagonist, T-1000, the shapeshifting android assassin. Despite being pumped with bullets from the 12 gauge Winchester shotgun of T-800 (played by Arnold Schwarzenegger), T-1000 absorbs bullets, miraculously melts back into shape and after a brief pause, keeps going with steadfast steeliness and resolve.

I have thought about T-1000 a lot this year. Not only is Marcellin College, like everyone else, coping with the impact of COVID-19 and all of its curveballs, we’re into the first year of a new Year 9 and 10 teaching and learning program, are rolling out a new learning management system and have a new middle leaders program. We also have a new principal and deputy principal and new Year 7 and 8 programs in the wings. Sound challenging? Oh yeah. Insurmountable? It has felt like that at times (in fact, a lot of times) but somehow the image of T-1000 calmly and purposefully moving forward, absorbing pressure, has reinforced the importance of embracing change with measured and fluid adaptation.

T-1000 is a bit of a lone wolf though, whereas Marcellin College is big Catholic Marist community with a diverse array of staff, boys and their families, so while T-1000’s protean nature helps him respond to setbacks in a very physical way, we’ve coped with (and adapted to) all that’s been heaped upon us by honouring our identity as people of hope, as well as drawing on our belief in the power of community and mystery.

We have also had to ‘feel the fear and do it anyway’ about a lot of things which has been great for the College culture and opened a few windows a la Vatican II. This is no mean feat; Marcellin’s size means that it is home to staff at various career stages, as well as staff that are new to the College. This means that at any given time we have staff on a continuum:

As my brother sometimes says, ‘Sanyo. That’s life.’ And he’s right; it is and it’s good advice, otherwise you’ll do your head in; however, the upside to all of this is that crisis has been good for us – we’ve had to do things to survive that would have taken forever to implement in other circumstances. And I am not telling tales out of school, tonnes of organisations have said the same thing. A case in point is the fact that we entered into a full and committed relationship with Microsoft Teams with a minimum of fuss. It is amazing what a bit of adrenalin and a ‘get tough or die’ mindset can achieve. This involved short, sharp professional learning sessions and a lot of discussion, collaboration, and experimentation. Some sessions were face-to-face, and others were via Teams. We recorded these sessions, created short instructional videos for one another and used the chat stream to fight the power in the face of challenge. We even embraced Microsoft’s changes to Teams as we went along. No dramas at all. Lessons learned out in ward rounds also proved to be rich sources of PD as teachers learned how to outfox students who thought they could take control of the microphone. Talk about satisfying small wins.

Another huge upside was getting everybody really moving with our learning management system. It really came into its own in terms of the delivery of our home learning program. The curriculum was visible to families and continuous reporting happened…just like that. It was not always straightforward. Some staff wanted to do their own thing because what they had been doing worked and the whole idea of a learning management system just seemed too much. But letting this continue was not an option, so we continued to support our staff with access to one-on-one coaching about the learning management system and created instructional videos and resources to develop everyone’s skills and understanding.  We also empowered our middle leaders to assist their teams and instil – gently – a sense of responsibility and accountability in their teams. We also ran Pop Up PL sessions linking our learning management system’s tools to the design principles of Polaris – providing students with opportunities to be autonomous, feel competent and develop strong, affirming relationships – and effective online pedagogies. It felt like things were coming together – slowly – but we were moving forward.

Our professional learning schedule also bears the proud battle scars of an organisation that has had to reflect, change, and sometimes change again and again. A series of strikethroughs bears witness to this, as well as plenty of additional red text, however, despite its appearance, it tells the tale of a less complicated meeting schedule with more freedom and evidence of innovation. Some meetings were just cancelled, others stayed but were shorter and were conducted online, some were a mix of online and chat streams and some happened face-to-face in large rooms with desks 1.5m apart. Many were recorded, which was more inclusive, and provided staff with greater flexibility in their day. Optional workshops for staff who wanted to learn new things or brush up on existing skills and knowledge ran via a ‘Pop Up PL’ channel via the Staff Professional Learning Team in Microsoft Teams.

Dave Runge and I talked a lot about adaptive cultures last year and their willingness to lean in to challenge to ensure their survival and growth. At the time I could see the wisdom of what Dave was talking about but was facing a myriad of challenges just trying to keep my head above water in a new role that required me to support staff to implement a very ambitious teaching and learning program, as well as attending to core business (and a whole lot of other things). I must admit, I was not sure I had enough hours in the day to help Marcellin be the future school it aspired to be, but I have never stopped trying. Indeed, a key Marist text, Water from the Rock, guides staff in Catholic Marist schools to be sources of life for one another and to endure: ‘We become streams of living water’ and I often close my eyes and think about this metaphor, as well as the image of T-1000 melting back into life to tackle another challenge. I think the biggest thing that I’ve taken from this year is that Marcellin is not just capable of adaptation; it has adapted and grown. There’s still plenty to do, but our response to crisis has changed the way many of us see ourselves as individuals and teams and has provided us with different, more agile practices that have allowed us to thrive rather than struggle.

Director of Professional Learning and Partnerships